UJA-Federation and its 100%-owned subsidiary are funding programs against the Jewish state, ignoring their own bylaws, while hiding behind a misinterpretation of Internal Revenue Service rules, according to those IRS guidelines, tax lawyers and philanthropy experts.

These revelations from an in-depth JCCWatch Investigation threaten a major shakeup of UJA-Federation’s $1.3 billion Jewish Communal Fund operation, which continues to make questionable grants from donor accounts, while ignoring their own by-laws that hold the fund’s board responsible for every grant decision.

The question of the donor-advised funds has come to the fore as UJA-Federation and Jewish Communal Fund continue to donate annually to the New Israel Fund (granted $258,503 in 2014) and other “Jewish organizations” that actively work against the Jewish state.

B’Tselem (granted $10,036 in 2014) was the largest source, with 69 references, in this week’s UN Human Rights Council report against Israel.

What the ADL had to say about A Jewish Voice for Peace, in 2012:

UJA-Federation has yet to make a public statement on the funding of these anti-Israel groups, but proxies for the powerful federation, in the newspapers that benefit from its largesse and spokesmen of the many groups that receive its funding, reply with the canard that UJA-Federation “has nothing to do with the JCF grant process, which is up to individual donors,” in the words of Jewish Week publisher Gary Rosenblatt.

The IRS makes it very clear in its basic primer on donor-advised funds that Mr. Rosenblatt’s generous interpretation is very wrong:

8a. Does the donor have the ability to recommend investment options for the donor’s account?

If the donor has the ability to recommend an option, the organization must exercise ultimate decision-making authority in deciding whether such distribution will accomplish charitable purposes.

The Question of “Charitable Purposes”

The question of “charitable purposes” has a simple answer when the donor-advised fund is part of a commercial financial group, such as Fidelity’s Charitable Gift Fund, while the Jewish Communal Fund has the additional provision within its bylaws that grantees are not harming the Jewish people.

The main criteria that these commercial donor-advised funds need to verify before following a donor’s recommendation is if the grantee is, in fact, a non-profit. The UJA-Federation, as the sole owner of the Jewish Communal Fund, must adhere to even more stringent, and self-imposed, conditions, based on its own bylaws.

It has two additional responsibilities:

“deny any grant request where the purposes and activities of the recommended charitable organization are deemed to be adverse to the interests of the Jewish community.” 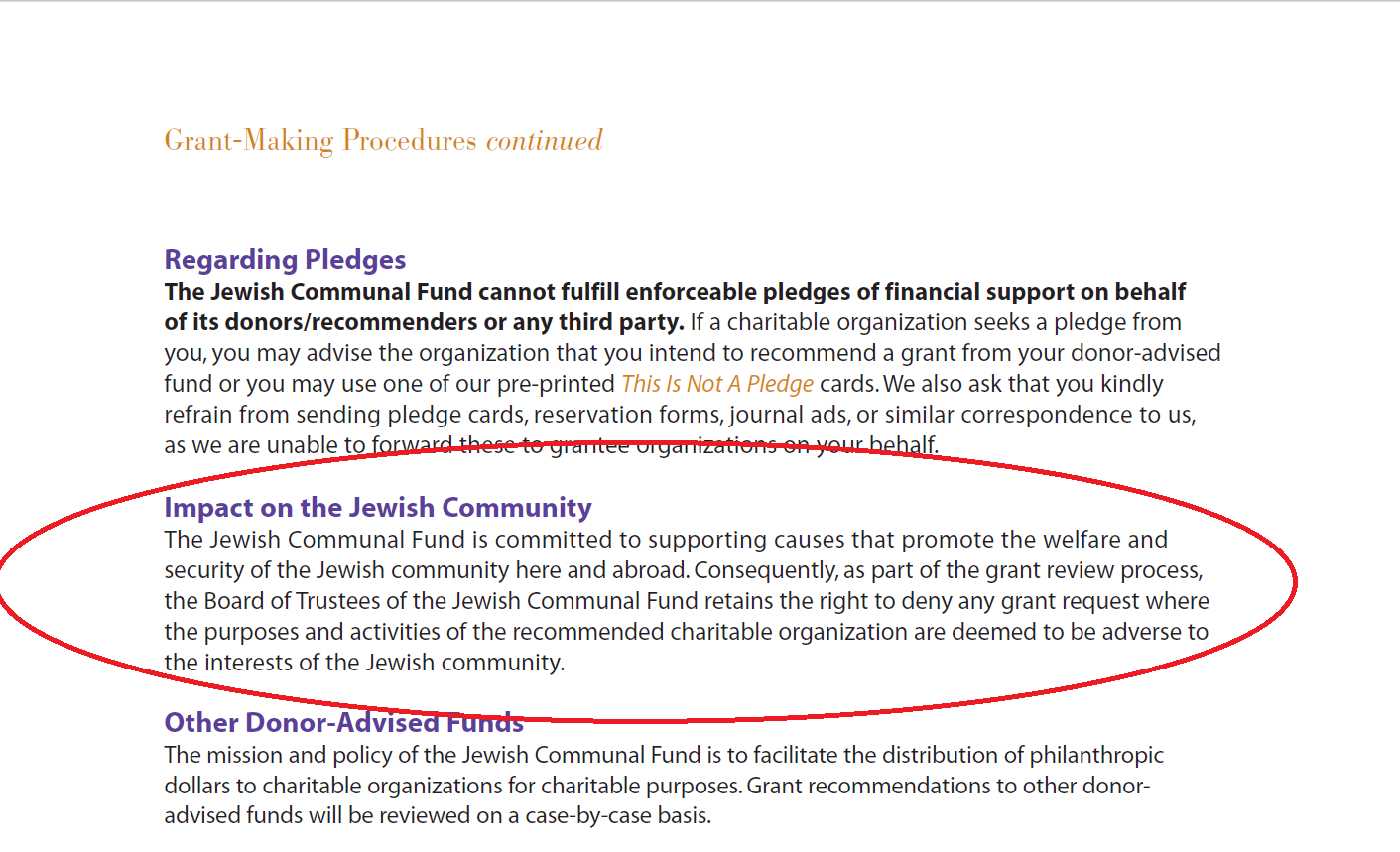 Who makes that judgement call?

That board has 25 members drawn mainly from the parent board of the UJA-Federation, including its president, Alisa Doctoroff.

An army of Doctoroff defenders have come forward in the media, casting the blame for the content of these donations on anonymous and wayward donors. The IRS would beg to differ.

IRS rules and case law precedent have set clear standards of how “donor-advised funds” are meant to operate, and who has responsibility for what.

“Once the donor makes the contribution, the organization has legal control over it,” according to the IRS circular on donor-advised funds.

According to the IRS:

“The court also found that donors had relinquished all ownership and control over the donated funds or property to NFI and that NFI exercised its discretion in authorizing charitable distributions of the funds.”

NFI “had control of all donations, and it was free to accept or reject any suggestion or request made by a donor.”

Philanthropy consultancy Planned Giving Design Center, LLC, makes it clear in a lengthy online discussion about the uses and abuses of the structure:

“The donor’s role is that of an advisor —

“Through donor-advised funds, people give money to a community fund or other nonprofit and then are allowed to recommend where the money will go—leading many people to think of the funds as a charity checking account. But to get the tax deduction, the donor cannot control the money, and that has led to numerous disputes.”

“The Court explained that the donor gave up any interest in the donated funds under the parties’ donor advised fund agreement, and therefore the donor did not have the right to control the use or expenditure of the funds.”

The court said that the charity “‘had the discretion to reject any of his recommendations for the donation’s use.’”

All grant recommendations are nonbinding and are subject to review of each organization’s tax-exempt charitable status and approval by our Board of Trustees.

JCCWatch calls on the UJA-Federation to reject donor recommendations that go against the Jewish community and the state of Israel.

The board must enforce its own guidelines and stop providing cover and financial resources for these organizations. A good place to start would be any group listed on the ADL’s list of Top 10 Anti-Israel groups in America, and all of those on NGO-Monitor’s alphabetized list of groups claiming to defend human rights while actually abrogating them.

The UJA-Federation should return to its original mission of fundraising for its beneficiary agencies, and stop acting as a Trojan horse against “the interests of the Jewish community.”