Blogger Jeff Dunetz stood firm against supporting the UJA-Federation’s poor decisions to give money to the New Israel Fund, with a lengthy post on Sunday at YidWithLid, “Why I Won’t Be Going To Today’s Israel Parade (And Why You Shouldn’t Donate To UJA)”

Dunetz details all of the many organizations out to destroy Israel that receive their funding via mainstream groups, following up on JCCWatch’s reports from last week.

His opinion:  “Yes–Your donations to UJA go to delegitimize the state of Israel… Why is the UJA funding an anti-Israel group? Well perhaps you should ask them when you send them a letter telling them you wont be donating this year.”

One of the great things about the Jews as a people is we try to be inclusive of all people and points of view, it is also one of our downfalls. As Jabotinsky once said:

“It is incredible what political simpletons Jews are. They shut their eyes to one of the most elementary rules of life, that you must not “meet halfway” those who do not want to meet you. –Ze’ev Jabotinsky, The Iron Wall November 4, 1923”

I will not participate in a rally for the destruction of the Jewish State, nor will I donate money to the UJA Federation which helps to fund such groups. I will be staying home today and I will be donating to more worthy organizations. I urge that you do so also. 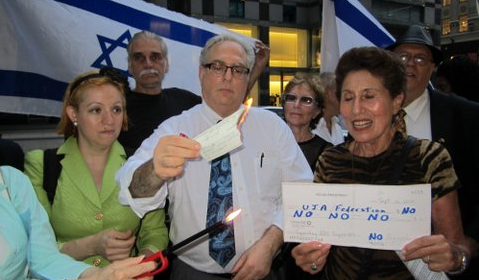